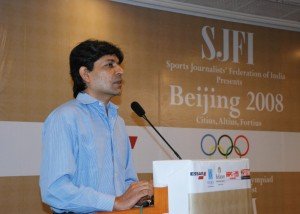 My association with SJFI goes back many decades and I have wonderful memories interacting with the hundreds of sports journalists across the country who day in and day out highlight India’s sporting achievements, both at the junior and world levels. The SJFI has always been committed to the cause of pure journalism and its members truly embody key qualities of ethics, hard work, research and the spirit of promoting young and established sporting heroes of our country. I wish them the best on this occasion and hope they continue to promote Indian sport and sportspersons the way they have since they were established.

We don’t have statisticians like Mohandas Menon in SJFI, but surely six consecutive century opening partnerships from six games, spread across two editions of a tournament and played in two different cities, would have been a delight to record for anyone from his tribe. Add the fact that all the century stands were between the same pair who answered to the name “Satish’’ and dear Menon could well be in a spin.

As were the opponents in those two years, 1997 and 1998, Chennai and Mumbai played perfect hosts then as South Zone won back-to-back tournaments without breaking a sweat, the sweltering heat notwithstanding. All through the six games played — if I remember right we played them at the MA Chidambaram Stadium (main ground and the B ground), Wankhede Stadium and Bombay Gymkhana —  I had the best seat in the house as my opening partner A.K. Satish made merry against the bowling attacks of West, North and East zones in 40 over games. I haven’t seen cleaner hitting from anyone else in all my years of playing J.K. Bose,  starting from 1995/96, not even from me!

It was a good match-up. With A.K. Satish playing the amount of strokes to the fence, we didn’t have to run too many. That helped us cope with the heat and humidity in both cities. In fact the only disagreement we had was at the match venues in Chennai; while we from Bangalore were insisting on playing all our games at the smaller MAC ‘B’ ground, A.K. Satish and his Chennai mates prevailed upon us to play at least one game inside the main stadium, just for the experience of playing at the world famous Chepauk. Fortunately both of us were good enough to reach the boundary even on that ground, so there still wasn’t much running, something which the poor fielding side wouldn’t quite have agreed with.

I remember one game in particular, the first one I think. A team member, Sanjay Rajan, son of the late Rajan Bala, was slotted to walk in at No. 3 and as was his wont, he  sat alone out in the sun next to the sightscreen. It was his way of concentrating. Poor Sanjay had to wait a long time before one of us fell and when he walked in, it was only to walk out immediately, gone to the first delivery he faced.

Mumbai was even better, because by now the multitudes who followed the J.K. Bose tournament (approx. 80-100 people), had come to expect big things of us. We didn’t disappoint anyone, including ourselves, making full use of the opportunity to play at the Wankhede and the beautiful Bombay Gymkhana. Mumbai, to me, has always had the best pitches to bat on and we were not the ones to look a gift horse in the mouth.

It sure was great walking out with you A.K.Satish  at the start of a game and at times walking out unbeaten at the end of it. Thanks for the good times.

Satish Viswanathan, A.K. Satish’s opening partner, always thought he would eventually land the world’s best job, that of a professional cricketer, convinced as he was that he was the next best thing to his batting idol Sunil Gavaskar. But then, in his mind, he landed up with the world’s next best career, that of being a cricket journalist. After all,  what better life than one which involves being paid to watch and write on one’s favourite sport. These days he talks about it more, having moved onto the television space.

The APSJA rose to the occasion to host the convention and tournaments in a grand way. Of course it would not have been possible without the support of the Hyderabad Cricket Association, PVR Group, Andhra Cricket Association, Vijay Mohan Raj, Global Hospitals, Sports Authority of Andhra Pradesh and the AP Table Tennis Association. The cricket and table tennis tournaments were played at the Uppal Stadium. Three cricket matches were held at the Gymkhana ground and the Penalty Kicks (football) and Free Throws (basketball) competitions, at the adjacent ground and court.

The four-day event for the sports journalists was like a much-needed outing; keeping their pens and laptops aside, they showed their skills as cricketers, table tennis players, hoopsters and footballers. There was much fun in the penalty shoot out and free throws competitions, but the teams played cricket and table tennis in all seriousness.

The SJFI delegates enjoyed their stay at Hyderabad. The SJFI and APSJA published the newsletter ‘Hyderabad Rocks’ in print and digital formats. The manger of the Indian team that won the 1983 World Cup, P. R. Man Singh’s hosted a dinner at the historic Secunderabad Club. It was a memorable evening indeed!

N. Jagannath Das first became a sports journalist with ‘Newstime’ in 1984 and thereafter he joined the ‘Indian Express’. Currently he’s employed with the ‘New Indian Express’. A passionate sports lover, he has seen the rise of sportspersons like Laxman, Gopichand, Saina Nehwal, Sania Mirza, Parupalli Kashyap, P. V. Sindhu and many other Hyderabad-based sportspersons.